There are lots of delicious foods that start with Y. We actually have found 25 incredible Y foods! Whether you are eating your way through the alphabet or just curious about foods that begin with unique letters, this list is pretty valuable! We know that you will find some interesting foods on our letter Y list and hope you take the time to try them all. Now let’s take a look at the many Y foods out there! 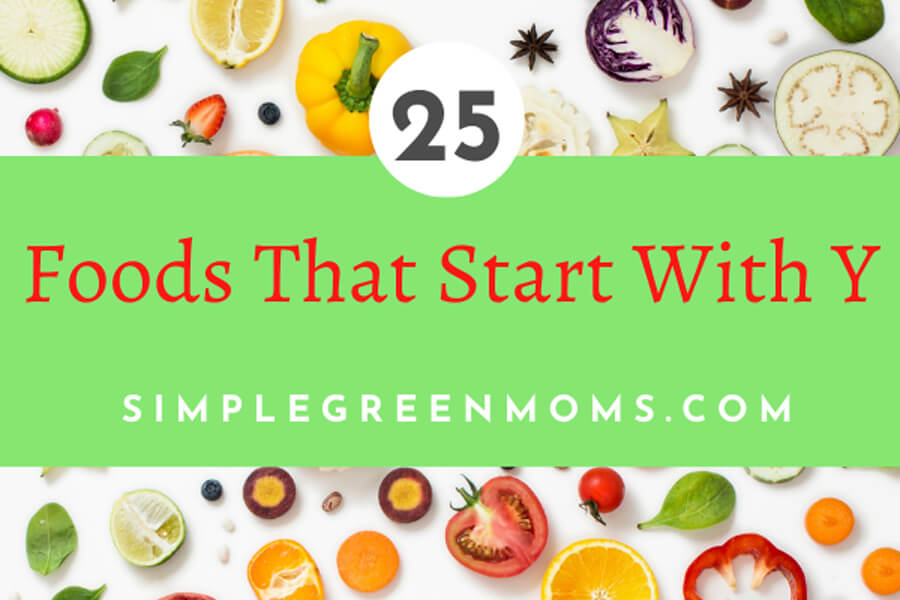 Foods That Start With The Letter Y

Yam beans are a member of the legume family. The root of the yam bean is the part that ends up in the kitchen. Yam beans are most commonly called jicama. The crunchy vegetable is most often peeled, sliced, and served raw.

Yardlong bean is often called asparagus bean. The very long green pod is full of edible beans similar to those in a green bean. You can prepare yardlong beans by steaming them with some salt and pepper. They can then be served with a little lemon juice or chopped garlic.

Yuzu is a citrus fruit with a bright orange exterior. Yuzu is eaten like most citrus fruit. The peel is discarded and the fruit falls into bite-sized segments. Yuzu is believed to be a hybrid of the more common mandarin orange.

Yuca is a starchy root vegetable that is similar to a potato. The roots are grown on a short, bushy shrub that is native to South America. Yuca is very versatile and can be used to make french fries, as a side dish, or ground into a powder to help thicken sauces. The mild flavor goes well in many different dishes.

Yams are a root vegetable with brown exterior skin and orange, starchy flesh. Yam tubers are often confused with sweet potatoes. However, yams are starchier, have a bumpier exterior, and are more similar in taste to a yuca root than a sweet potato.

Yeast is a natural leavener often used in bread baking. Yeast helps bread rise by converting sugar into carbon dioxide and ethanol. The gases expand in the bread and cause it to puff up. Yeast is technically alive before being mixed into a dough and baked.

Yabby is a freshwater Australian crustacean found in rivers, billabongs, and creeks. They are similar in taste and texture as a crayfish. Yabby can be boiled or steamed then served alone or with condiments. It is recommended to dunk yabby in fresh, clean water prior to cooking in order to get rid of any mud or dirt that may be stuck in the shell.

Yellowfin tuna is next up on our list of letter y foods. This large fish is found in tropical and subtropical waters. It is prized for its tender, flavorful meat. High-quality tuna is sliced and served raw inside sushi or sashimi. It is also a perfect food to grill.

Yogurt is made by fermenting milk. The bacteria used to ferment the milk is called a yogurt culture. After the fermentation process, yogurt can be served plain, mixed with fruit, sweetened, made into a yogurt sauce or even a parfait. Yogurt is very popular around the world with each country putting its own twist on this dairy treat. Greek yogurt is much thicker while Icelandic yogurt is higher in protein.

Yellow wax beans are pale, stringless bean pods. They get their name from the exterior color! They can be eaten raw, straight from the plant, or cooked to soften the bean. The beans grow on short bushes and are fairly easy to cultivate.

Yogurt cheese is next up on our list of y food. Yogurt cheese is a thick, spreadable type of yogurt. To make the cheese, yogurt is strained and the majority of the water is removed. The result is a soft cheese similar to cream cheese.

Yankee pot roast is a thick beef stew made with potato, vegetables, and beef broth. The meal was first created in New England and represents how eating frugally can result in fine dining. You don’t need the best cuts of meat to make this dish, just a little time, patience, and seasonings!

Yorkshire pudding is made from three simple ingredients. You only need eggs, flour, and water, or milk to make this versatile side dish. The pudding is an English classic dish that can be served in many ways. It is a perfect accompaniment to a savory dinner but also can be a wonderful base for a dessert.

Yolk is the center part of an egg. Yolks are high in healthy proteins and also in fats. There are many culinary uses for a yolk. You can use egg yolks in baking, as a thickener or simply cook them and eat them raw.

Yautia is the next y food on our list of foods and a very versatile one at that. Yautia is a starchy root that is similar to yuca and potatoes. To prepare yautia, the brown skin is peeled off and discarded. The light-colored inside is then boiled, baked, or sauteed to soften it. Once cooked, the vegetables can be seasoned and enjoyed in many various dishes.

Yellow fin potatoes are a species of potato with golden-colored skin. The inside flesh also has a yellow hue and a very tender, buttery taste. They are perfect for mashing, using in stews and chowders, and for roasting as well.

Yiros definitely need to be included on our list of foods that start with y. They are too delicious to be forgotten! Yiros are also called gyros by many people. Most recipes for this popular Greek sandwich involve stuffing pita bread with meat, vegetables, and tzatziki sauce. The signature yogurt sauce is what really makes the yiro stand out as an amazing letter y food.

Yangmei is a Chinese bayberry. The small red berry resembled a strawberry but is grown on tropical trees rather than low-lying bushes. Yangmei also tastes like a strawberry or raspberry but also has an herbal flavor.

Yakitori is a great letter y food that originated in Japan. Yakitori recipes call for skewering chicken and then roasting it over a charcoal fire. The meat is then seasoned with tare sauce and salt. The flavorful bite-sized chicken is often enjoyed alongside a cold beer and served in inexpensive restaurants.

Yiessas are a small evergreen tree that is native to Central and Northern America. The tree produces very thin, orangish skin that has a sweet taste. The fruit is high in fiber but also said to be an acquired taste. Many people use the fruit for juice rather than plain eating.

Yali pear is a must on our list of foods that start with y. This species of pear is very pale white and often sold under the name Chinese white pear. The pears ripen after being picked and have firm, crunchy flesh. Yali pears are mostly eaten raw but can be baked into fantastic dessert recipes as well.

Yam gizdodo is a popular Nigerian dish. It consists of fried yam, plantains, and gizzards. Bell papers, onions, and other vegetables often find their way into the dish as well. Yam gizdodo is typically served as a side dish but is definitely hearty enough to be the main course. The name gizdodo references the gizzards inside the dish.

Yodels are frosted, cream-filled chocolate cakes made by Drake’s food company. The popular dessert has been around for decades and is a classic sweet treat in the United States. You can find many recipes to make this tasty y dessert at home but nothing compares to the classic packaged version.

Yak is one of the more rare meats in the world but it is definitely a good one. Yak is tender and lean with a similar texture to venison and bison. It is common in Tibet and Nepal but not often consumed in the western hemisphere.

Yokan is a Japanese red bean jelly. The dessert is made with red bean paste, agar-agar, and brown sugar. It is prepared in blocks then sliced and served as small, bite-sized pieces. Some people use yokan as emergency food since it is filling and stays fresh for quite some time.

22 Foods that Start with U