Our list of foods that start with V is perfect for anyone eating their way through the alphabet. This list is also great to read if you are simply curious about letter V foods. 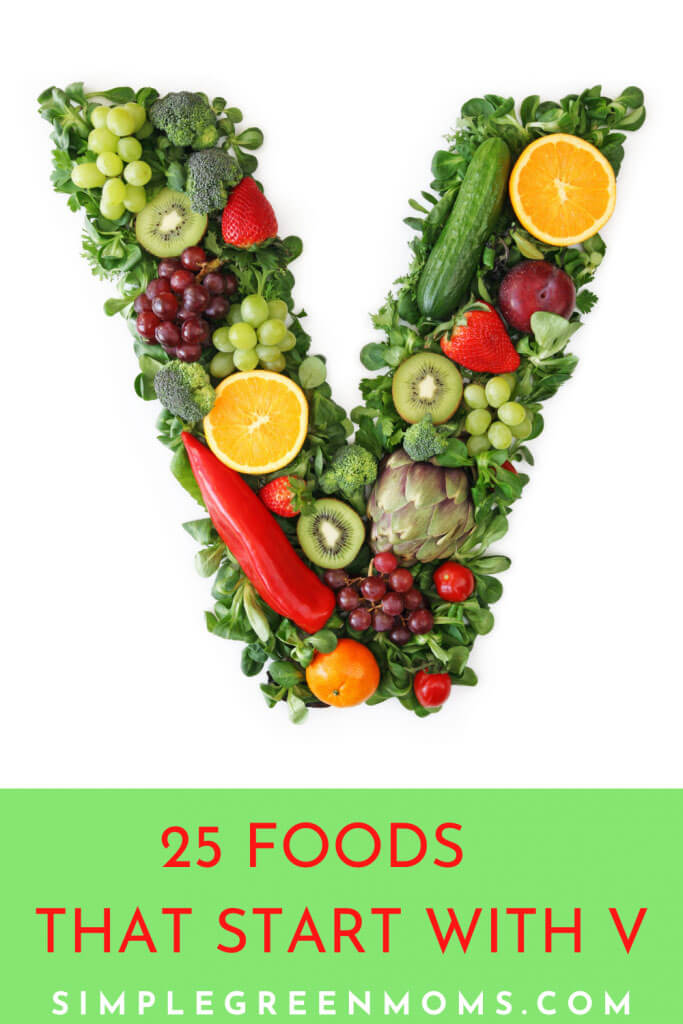 Foods that Start with the Letter V

We have found 25 unique foods that start with V and rounded them all up right here for you. Some of these V foods may be familiar, while others are sure to be new and exciting.

Vanilla ice cream may be one of the most delicious letter V foods on our list. It is a sweet dessert that is enjoyed around the world.

Vanilla ice cream is traditionally made with whole milk, eggs, sugar, and vanilla extract. Ice cream can be made with different kinds of milk like coconut milk or heavy cream. Some variations use alternative sugars, no eggs, or pretty speckled vanilla beans.

No matter how vanilla ice cream is made, it is still a delicious letter V food.

Vegetable oil is a letter V food that you probably use quite often. It is made by extracting oil and fats from vegetable seeds and other parts of the fruit.

Vegetable oil is used for deep frying foods, sauteing veggies, and baking goods. It is generally considered to be a good source of healthy fats.

Velvet beans are an annual climbing vine that grows in tropical climates. The tropical legume native to Africa, India, China, tropical Asia, and the West Indies is quite an unusual food.

Velvet beans are also known as mucuna beans. The pods are bright orange and red and are slightly fuzzy. The fuzzy hairs irritate the skin if touched with bare hands.

Velvet beans are typically given to animals. While the plants are edible, they are very hard. Many people roast and grind velvet beans then brew them like coffee.

Vindaloo is an Indian curry dish. Vindaloo sauce is made from caramelized onions, curry paste, coconut milk, ginger, chili peppers, chickpeas, and spices. The flavorful dish is served over rice or enjoyed plain.

Vindaloo has a sweet and spicy taste that is quite appealing. It is a great food for our list of foods that start with V! It may be the most popular food beginning with V in all the Indian cuisine out there.

Vichyssoise is a french soup made with potatoes, leeks, chicken stock, and cream. It is typically served chilled. This thick soup can also be enjoyed hot.

Vichyssoise is a perfect example of classic French cooking. It is a simple yet hearty creamy soup. The letter V food is a staple on many French restaurant menus.

Vol Au Vent is a small round puff pastry that is hollow in the center like a bowl. The puff pastry is filled with a savory mix of meat or fish. The rich sauce is poured over the puff pastry, creating a decadent appetizer or entree.

The ring-shaped pastry is a classic French dish. The name vol-au-vent translates to mean “windblown.” This is in reference to the light, airy puff pastry. However, the dish is often quite hearty.

The Victoria sponge cake was a favorite cake of Queen Victoria. The queen would enjoy a slice of sponge cake almost daily alongside her tea.

Verjuice is a very acidic juice made from pressing unripe grapes, crab apples, or other sour fruit. The juice taste quite sour with a slight fruity sweetness.

Verjuice is similar in taste to vinegar but without the acid. It is like a white wine but without the delicious complexity. Use verjuice in cooking or for drizzling over a salad.

Vinegar is the next letter V food on our list of foods that start with V. Vinegar is an acidic liquid produced by fermentation. The acetic acid bacteria ferment the fruit or vegetable and create what we now call vinegar.

Vinegar adds a wonderful tangy flavor to foods. It is often used to make salad dressing, brighten the sauce’s flavor, or for dipping bread.

Vinaigrette is a type of salad dressing made with olive oil, vinegar, and spices. There are hundreds of kinds of vinaigrette, and most are quite simple to make.

Any kind of vinegar or acid can be used to make a tasty vinaigrette dressing. Lemon juice, lime juice, or champagne vinegar are all perfect for whipping up a quick vinaigrette.

Play around with olive, acid, and spices to create your own vinaigrette. You can surely make something fantastic!

Velveeta is made with whey protein, milk protein, fat, and salt. It melts very quickly in low heat. Velveeta is often used for mac and cheese.

Vienna sausages are the next item on our list of foods that start with V. They are a thin, parboiled sausage that is traditionally made with pork and beef. The sausage is smoked, giving it a delicious flavor.

Vermont’s cheddar cheese is in its own classification of cheddar. It is considered to be much better than regular cheddar cheese since it has a sharper taste.

Vermont cheddar has a bitter and bitey taste. It is stronger than most cheddar cheeses and can be made in either yellow or white cheese.

When perfectly ripe, the plums are sweet and succulent. They are easy to grow and one of the most popular mid-season plum varieties.

Vanilla is a flavoring derived from the genus vanilla orchids. Vanilla is mainly used to flavor desserts. It is delicious in baked goods, ice creams, and mixed drinks.

Vanilla is usually served as an extract. Vanilla beans are very popular as well. Scrape the seeds out of a vanilla bean pod for a very intense vanilla flavor.

Valerian tea is made from the roots of the valerian plant. The potent tea is said to promote sleep and relieve anxiety. However, valerian tea smells very strongly, which can be off-putting.

Valerian is also available as a capsule and a liquid extract. It takes three years to grow the roots to make valerian tea.

Vodka is a distilled alcoholic beverage that originated in Russia and Poland. Vodka is perfectly clear and made with water and fermenting ethanol. Traditionally it is made by fermenting cereal grains or potatoes.

Vodka can be flavored or created plain. The standard vodka is quite strong, with an alcohol concentration of 40% alcohol by volume. It is usually used in a mixed drink or served cold as a shot.

Vermicelli is a long rounded noodle. It is very similar to spaghetti or angel hair pasta. In Italy, vermicelli is a very thick noodle. However, in other parts of the world, it is a thin, skinny noodle.

Vermicelli noodles are deliciously cooked and tossed in tomato sauce. Just a little butter and parmesan cheese are also perfect!

Venison is another name for deer meat. It is red meat that is cooked like beef.

Venison has a rich, earthy flavor. It is not as juicy or succulent as beef. It does have flavors of herbs and acorns, which is what deer naturally eat.

Venison is typically wild-caught. The flavor of the meat will vary based on the game animal it came from.

Next up on our list of foods beginning with V is the valencia pride mango. This type of mango is native to South Florida. The tree grows to be about 25 feet tall and bears fruit that is one to two pounds.

The mangos have a sweet, unrivaled flavor. They are considered to be one of the best mango varieties in the world. Valencia mangos are best eaten raw but delicious in dessert recipes as well.

The velvet apple is a tropical fruit related to persimmon. It is not technically an apple but looks very similar to one.

The white, crisp flesh has a sweet taste. It can be compared to a banana, apple, and berry combined. It also has hints of bubble gum flavor.

Darker fruits are considered sweeter than pale varieties. The fruit will get slightly soft when it is ready to eat.

Vermouth is a fortified wine used in cocktail recipes. Fortified wine means a wine that is spiked with another liquor. Brandy, herbs, and spices are typically used to make vermouth.

Vermouth is mainly used as an ingredient rather than a drink on its own. You can drink vermouth plain, but it is best when mixed into a tasty cocktail.

Veal is a type of meat from the calves of dairy cows. It is very tender and juicy.

Veal is often debated as being inhumane since it comes from baby cows. The calves are quite young when they are processed. Some countries view veal as a true delicacy. It is perfect for our list of foods that start with V either way!

Valencia oranges are extremely juicy and sweet. The sweet juicy oranges are named after Valencia, Spain, which is known for its citrus production.

Valor beans are flat green beans popular in Gujarati cuisine. They are also known as helda beans and runner beans.

The green pods can be eaten whole when young. As the beans age, the tough exterior is removed, and the small beans inside are eaten.

There are so many various fruits and other foods that start with V. Many of these surprised me, even as a professional food blogger!

We hope you discovered some exciting foods that start with V. Time to eat all the alphabet foods in the world! Enjoy.

60 Easy Appetizers for a Crowd