Have you ever wondered about foods that start with F? There are actually quite a few!

Whether you are trying to eat your way through the alphabet or simply interested in letter F foods, we can help! Our list will help you find incredible, exciting letter F foods that will delight your taste buds. 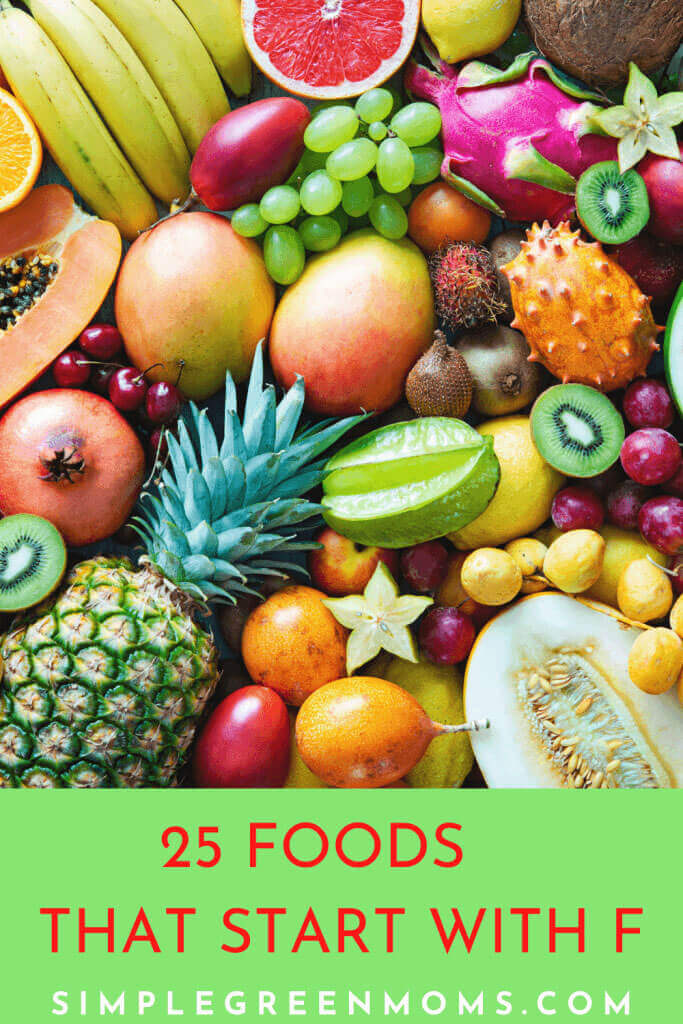 Foods that Start with the Letter F

We have found foods from around the globe that begin with F. We have covered them all, from Greek feta cheese to classic French fries!

There are likely letter F foods on our list that you know, but surely some will be new! Take a look and then give a few of these foods that start with F a try!

The first food beginning with F on our list is fried chicken. This may be one of the most popular F foods out there!

Fried chicken can be made in many different ways. Oil is usually used for frying chicken. Chicken can be battered and deep-fried in hot oil or coated in bread crumbs then cooked in shallow oil.

Fried chicken can be made from any part of the chicken. Deep-fried chicken wings may be the most popular kind of chicken.

French green beans are harvested earlier than regular green beans. They are quite tender and flavorful, thanks to the early harvest.

The next letter F food on our list is French onion soup. This classic soup is made with beef broth and caramelized onions. The onions soften as they simmer in the broth, making them soft and sweet.

French onion soup is garnished with crusty bread and a piece of provolone cheese. The soup is placed under a broiler to brown the cheese before it is served.

Fava beans are a fun, springtime bean that is perfect for our list of foods that start with F. Fava beans look like lima beans but are less starchy and have a mild flavor.

The Fava bean is creamy, earthy, nutty, and slightly sweet. They are great for cooking and eating alone or adding to soups. The beans are full of fiber and plant-based protein, making them quite healthy.

Fondue is a fun and festive food beginning with F that we adore. Fondue is a swiss melted cheese dish that is kept warm so small pieces of food can be dipped in.

Fondue traditionally revolves around melted cheese, but it can also take on other forms. Raw meats can be cooked fondue style, placed on a skewer, and cooked tableside. Fondue can also be made with melted chocolate and dipped fruit. You can’t go wrong with chocolate fondue!

The possibilities for a good fondue are endless! That is why we had to include it on our list of foods that start with F!

Flan is a type of baked custard dessert native to Spain and South America. To make flan, a clear caramel sauce is poured into the bottom of a ramekin. A mixture of milk, sugar, and eggs is whisked together and poured over the hardened caramel.

The flan is baked until completely set. It is best served cold. The sweet flavor of this letter F dessert is unbeatable!

Farce is an interesting letter F dish that dates back to the 14th century. Farce is also called forcemeat. The term can refer to any type of ground, highly seasoned meat served either alone or as a stuffing for a vegetable.

A common type of farce is made with ground raw chicken, minced mushrooms, pistachios, onions, butter, and parsley. Lean, high-quality meat is best to use since it is eaten raw.

Fritatta is an egg-based Italian dish that is very similar to an omelet. Frittatas also resemble crustless quiche.

A frittata can be made with almost any veggie, cheese, or meat mixed into the eggs. The scrambled eggs mix is poured into a hot skillet and cooked, untouched, until the eggs are set, and the edges are browned.

Frittatas are great for using up leftover cooked veggies and meats. Make a frittata to transform last night’s dinner into an incredible breakfast.

Fennel is a very common veggie that has a licorice taste. The fennel plant is actually a member of the carrot family, even though it is not a root vegetable. The flowering plant has feather-like stems similar to a carrot.

The thick bulb of fennel can be used in soups and roasted vegetable dishes. The tender fennel fronds are perfect for sprinkling overcooked meats.

Fenugreek is an herb made from edible seeds. It is native to the Mediterranean region and western Asia. The seeds are used in cooking and to add flavor to dishes.

Fenugreek has a sweet, nutty flavor that many describe as tasting like maple syrup. The herb is quite healthy and may help reduce blood sugar levels and increase milk production in breastfeeding mothers.

A frankfurter is a classic food beginning with F. It is iconic and delicious. Frankfurters are made with minced pork and beef. The meat is smoked and pressed into a sausage casing.

Frankfurters are usually cooked on the grill. They are very similar in taste and texture to a hot dog but a little fancier.

Serve your frankfurters on a bun with ketchup, or keep them pure and simple on a plate with no condiments. This is definitely a food beginning with F that you should add to your next grocery shopping list!

Feta cheese is a Greek brined and cured cheese made from sheep milk. Goat’s milk can also be used to make feta.

Feta is very soft yet compacted into a block for easy cutting. They taste salty and tangy.

Feta crumbles quite easily and is great on top of a salad. It is also delicious melted into a warm pasta dish or spread across some bread drizzled with honey.

Filet is a culinary term used to describe a piece of boneless steak. Filet mignon is the most common filet, and it also may be the most delicious.

Filets are cooked with very little seasonings. They are very tender cuts of meat and do not require much-added flavor. Filets are best served undercooked, so the taste of the meat shines through.

Fish has to be included on our list of foods that start with F. It is a staple food around the world.

There are hundreds of different types of fish and just as many ways to prepare them. Fish can be battered and fried, baked in the oven, or eaten raw in sushi. Whether your fish is cooked slowly or eaten raw, the possibilities for fish are endless and exciting!

Falafel is a popular Middle Eastern food made from ground chickpeas and broad beans. The mix is rolled into small balls and deep-fried.

Falafel is served inside pita bread, making a tasty sandwich. The fried balls can also be served as an appetizer with a tasty tzatziki sauce for dipping.

The frosting is one of the sweetest foods beginning with F on our list. It is also quite versatile. The frosting is primarily used to coat cakes or for decoration. However, frosting can be piled on top of cupcakes, scooped onto ice cream, or even enjoyed plain with a spoon.

There are many types of frosting in the world, some sweeter than others. American frosting is made with powdered sugar and butter, while French buttercream frosting uses rich egg yolks and sugar syrup. The whipped cream frosting is nice and light.

Choose your frosting based on its eventual application.

French toast is a sweet breakfast food. Making French toast is quite simple. Thick slices of bread dipped in an egg batter and then pan-fried make this tasty food beginning with F.

Serve french toast with maple syrup and chopped fruit. Use different kinds of bread to adjust the flavor of the breakfast. Cinnamon raisin bread makes fantastic french toast, while slices of brioche will give you a hearty, butter taste.

Feijoa fruit is one of the more interesting foods that start with F. It is also called pineapple guava and grows in Southern Brazil.

Feijoa looks like a small lime. They are rich in vitamin C and folic acid, making them loaded with nutritional value.

Feijoa tastes like a strawberry and guava combined. The soft flesh and edible seeds are scooped from the tough green peel and enjoyed raw.

Fruitcake is a classic dessert made with dried fruit and nuts. Fruit cakes are often soaked in spirits for days before serving, making them dense and heavy.

Fruitcakes are traditionally served on Christmas or for weddings. A classic fruit cake recipe takes days, even weeks, to prepare. These complicated baked goods are best on special occasions!

Fox grapes are very small, seedless grapes. They typically grow in the wild. The fox grape is about the size of a pea and is not usually used in cooking.

Fox grapes are edible when ripe but quite tart. The small fruit can be used for making grape jelly, grape juice, or kosher wines.

Flax is one of the oldest cultivated crops in the world. The flax plant primarily grows in the Mediterranean region but can also be found in India. The tiny seeds are harvested, dried, and used in an abundance of culinary applications.

Flaxseeds are full of health benefits. They are rich in fiber, plant-based protein, and vitamins and minerals. The body absorbs the nutrients in flaxseeds best when the orangey-brown, tiny seeds are ground.

Farina is next up on our list of foods that start with F. Farina is milled wheat made in the United States and popular cereal grain. The word farina is Latin and translates to mean “flour.”

Ground wheat is used to make hot cereal for breakfast. Farina is served like oatmeal with toppings such as dried fruit, nuts, and syrup.

We have to include flour on our list of foods beginning with F! It is one of the most popular foods or ingredients on the list.

Flour is a powder made by grinding raw grains, roots, nuts, or seeds. Flour is used in thousands of culinary applications, from baked goods to thickening foods.

The most common type of flour is made from ground wheat. White flour is bleached, making it softer, fluffier, and whiter. Different types of flour will add exciting flavors to your foods.

Figs are commonly referred to as a fruit, but they are actually tiny flowers growing inside an edible shell. They are eaten fresh when ripe or used to make a pie, curry, or jam. Figs are very versatile and can be used in both savory dishes and sweet treats.

Figs grow around the world, but they are native to Mediterranean countries. They can grow on a bush or as a tree. Figs are planted as ornamental plants as well as for their fruit.

Fiddleheads are the last of our list of foods that start with F. They are a very rare edible fern that is considered a delicacy.

Fiddleheads grow in wet areas in North America. As the fern grows, it shoots out a small, tiny spiraled head. This tender little scroll is the edible portion of the plant.

Fiddleheads only grow for a short time before the plant develops into a full fern. The small spirals are deliciously pickled, pan-fried, or grilled. They are usually served as a vegetable. A professional chef will know exactly how to prepare many foods with this rare treat!

Incredible Foods That Start With F

There are so many amazing foods that start with F. We hope you enjoyed every one of these letter F foods, from the foods with a sweet flavor to rare foods native to small parts of the globe.

Are you ready to give some new F foods a try? Let us know which one is your favorite!