Have you ever wondered about foods that start with J? We definitely have! J is such a unique letter that it may be hard to find foods beginning with J. But fortunately, we have searched and scoured the culinary world to bring you this list.

Alphabet letter foods are our specialty, even those super rare foods starting with X!  So it’s time to get started and explore all the exciting foods beginning with J. Let’s go! 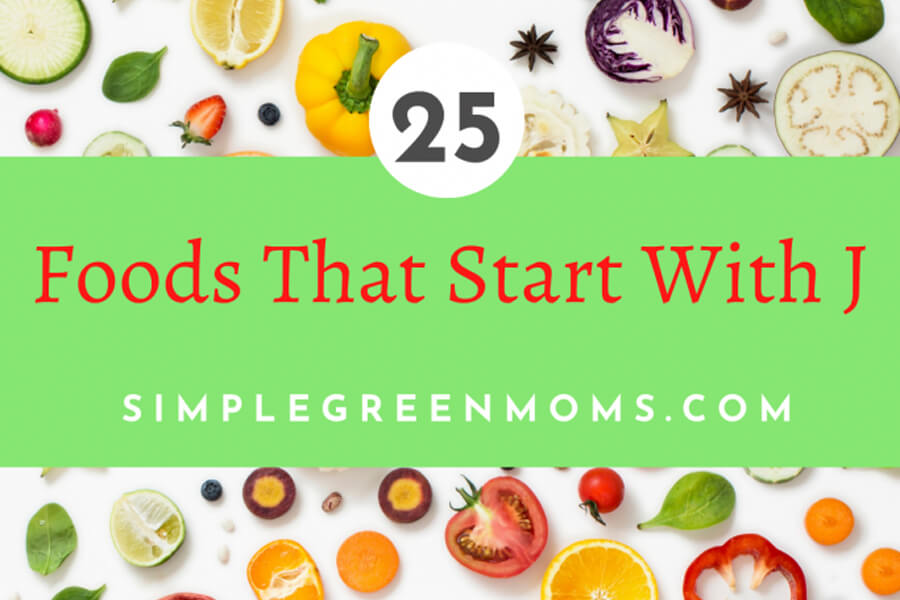 The Japanese plum is a small orange or reddish fruit that is native to China. However, the trees are now cultivated in Vietnam, Korea, Japan, and the United States. This fruit is sour and slightly salty. It is often used to make wine or used in baked goods.

The meat cut from the thigh of a hog is referred to as jambon once it has been smoked. The meat is cured and preserved using either wet or dry methods. This style of cooking the ham was popularized by France centuries ago and still used today.

Java is another word for coffee. The term java and coffee became synonymous in the 1800s when the main source of the world’s ground coffee beans came from the Island of Java. Thus, coining the phrase ” a cup of java”. The word is still used as coffee-slang today.

Next on the list of foods that start with J is Jell- O. This is a gelatin-based dessert that comes in numerous fruit flavors. Jell-O packets consist of a powdered mix that needs to be combined with hot water then chilled. Jell-O solidifies to form a jiggly, sweet treat that is popular with both kids and adults alike.

Jonathan apples were first grown in Woodstock, New York in the early 1800s. They are a medium-sized apple with a green and red flesh. They are crispy and sweet which makes them perfect for eating right off the tree. These apples are also great for baking and cooking, making them a terrific, multipurpose fruit.

Juniper berries are actually seeds rather than a true fruit. They are often dried and used as a spice. The oils from the berries are extracted and used to flavor foods and alcohol. Gin is one beverage that uses juniper as a flavoring, giving the alcohol its distinct taste.

Jerk is a style of cooking that originated in Jamaica. Chicken or meat is rubbed with a dry or wet seasoning called jerk spice. This consists of chilies, five-spice, allspice berries, pepper, thyme, and garlic. This method of cooking is typically used on chicken and gives the chicken a nice spicy taste.

Jelly Roll is a style of thin cake that is made by spreading jelly across a sponge cake and then rolling it up into a log. Once cut, the cake slice looks like a pretty spiral. Jelly roll cakes can be made in almost any flavor by using different kinds of cakes and different kinds of fillings too.

This dish beginning with j is a traditional West African dish. The rice is made in one pot and is often called “reddish one-pot rice”. Jollof rice is made with rice, tomatoes, onions, goat meat, and spices. The rice is made hot and smoky using chili peppers, curry powder, and cumin.

The first chocolate candy on our list of foods that start with J is Junior Mints. They are a small, round, soft mint filling that is coated in a thin layer of chocolate. This J candy was first created in 1949 and is still sold in stores around the world.

Jackfruit is a tropical fruit found in the rainforests of Malaysia and southern India. Jackfruit has a similar texture to bananas or pineapple since it is heavy and very fibrous. The taste of the fruit is sweet but it is also used in savory dishes to emulate pulled meat. It falls into the family of breadfruit and does have a spongy, bread-like consistency,

The term jimmies is synonymous with sprinkles. Jimmies are sweet, small pieces of candy that are used to decorate cupcakes and ice cream. Jimmies got their name decades ago when ice cream parlors in New England would donate their sprinkle proceeds to the Jimmy Fund Charity. The name stuck and many people still refer to sprinkles as jimmies.

This delicious drink must be on our list of foods that start with J. Jugo de Avena is popular in the Dominican Republic and is served mostly in the summertime. Oats and milk are blended together to make a refreshing and healthy beverage. The mix is strained and then flavored with fresh-squeezed lime juice and other tropical fruit.

Johnnycakes are very similar to pancakes and are made much in the same way. A cornmeal batter is prepared and then cooked in a skillet until golden brown. Johnnycakes are said to have been a staple of the indigenous people of North America. This sweet flatbread is delicious when served warm with some maple syrup poured over the top.

When searching for foods beginning with the letter J, jam was at the top of the list in popularity. Jam is essentially a fruit that has been cooked, sweetened, and thickened. Jam is very versatile and has many culinary applications. It is also quite simple to make at home!

Jerky is lean, sliced meat that has been dehydrated or dried in order to preserve the meat. Drying the meat, along with curing it with salt and seasonings, helps the meat stay fresh and edible for very long periods of time. It is also dense in nutrients, like protein, and a perfect snack for when you are on the go.

Jicama is an edible root that is native to Mexico. It is also commonly called a Mexican potato, a yam bean, or a Mexican turnip. Jicama is usually peeled and then eaten raw. Street vendors in Mexico often serve sliced jicama with lemon juice and chili powder as a crunchy, refreshing snack.

Looking for a spicy food beginning with the letter J? This medium-sized chili pepper is a very spicy J food for sure! Jalapenos are about 5-10 cm long and have a smooth green exterior. Jalapenos can also be red but the red varieties of this letter J vegetable are much sweeter than its green counterpart.

Jambalaya is a popular, complete dinner that is found in West African, French, and Spanish cuisines. The dish is made primarily of meat, vegetables, and rice that are mixed together in one big dish. The meat usually is some kind of smoked sausage along with seafood such as shrimp or crawfish.

Jujubes are small, brownish-red fruits that taste similar to an apple. Jujubes aren’t very juicy so they are most commonly dried and then eaten rather than being enjoyed fresh. The fruit contains lots of vitamin C and antioxidants.

These small candy spheres come in a huge array of flavors. Jelly beans are made by heating liquid sugar then mixing in glucose, flavorings, and a starch. The sweet syrup is then poured into jelly bean molds, steamed, and finally coated in a thin food-grade wax. Jellybeans are a popular Easter candy but many people enjoy them year-round.

Jewfish is another name for the Atlantic goliath grouper. It is a large saltwater fish that is primarily found in shallow tropical waters. These fish can be quite violent. They are not often caught and consumed as they put up quite the fight! However, they are great to eat when available and have a flavorful, flakey pinkish-white flesh.

Jaffa is a sweet and typically seedless orange. In addition, Jaffa is also a brand of orange chocolate candies that are trademarked by an Australian company. They have an orange-flavored chocolate center that is covered in a red candy shell.

The last of the foods that start with the letter J on our list is Jordan almonds. These are whole almonds that are covered in a honey-flavored candy shell. These almonds are a popular treat at weddings, baby showers, or other special events. The almonds are crunchy, nutty, and have just a touch of sweetness.

Can you believe how many foods there are that start with J? Let us know which ones you choose to make or try by leaving us a comment below! Also, be sure to check out our X or I food lists to see what other interesting foods you can find and enjoy.

35 Fruits that Start with C

35 Orange Foods: Can You Guess Them?
« 29 Foods That Start With I
Magic Bullet vs. NutriBullet: Who’s the Winner? »