You may be surprised to learn that there are lots of foods that start with I. In fact, we have found 29! Whether you are baking your way through the alphabet or just interested in finding some new I foods, we can help.

So what are your favorite I foods? Time to start reading and find out. 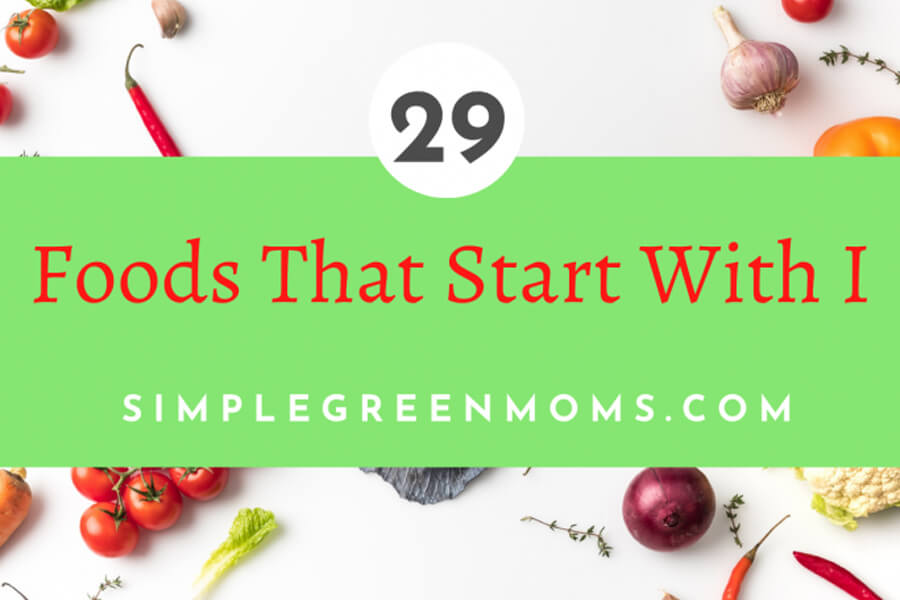 This may be one of the most common foods that start with I. Ice cream is a frozen dessert that is typically made with cream, eggs, sugar, and flavoring. There are thousands of variations and flavors of ice cream. Ice cream can be served in a bowl, on top of a cone, inside an ice cream cake, or blended into a milkshake.

Irish coffee is actually more of a cocktail than a traditional, morning time beverage. Hot coffee is blended with one shot of Irish whiskey, sugar, and cream to make this amazing drink. It is often topped with whipped cream or foamed milk.

The next food that starts with I on our list is iceberg lettuce. Iceberg lettuce is a very pale green vegetable that is crisp and has an overall neutral taste. It is the most commonly used lettuce for topping burgers. It is also popular in restaurants and diners since it is a hearty, long-lasting lettuce variety.

Irish soda bread is a type of quick bread typically made around St.Patrick’s day. The bread is leavened using baking soda rather than yeast. Buttermilk, raisins, and caraway seeds are some of the main flavorful ingredients found in this delicious bread.

Indian mustard is a very common type of brown mustard that has been consumed for centuries. The leaves of the mustard plant can be used in salads while the seeds are harvested and ground into a condiment. The mustard seeds can also be processed and made into mustard oil.

The icaco fruit is also known as the cocoplum. It is found near beaches throughout Africa and the Caribbean. The egg-shaped Icaco has a pink or purplish hue and can be peeled and eaten. The flesh of the Icaco is mildly sweet and spongy.

When looking for foods that start with I, we found idiyappam. It’s a classic dish from India. Idiyappam is also called string hoppers or nool puttu depending on where in India you order the dish. It is made from rice flour that is pressed into noodles and then woven into flat discs. The noodle discs are steamed and served while hot.

Foods that start with I seem to be abundant around India as here we have yet another! Idli is a popular, savory Indian breakfast. It is made using fermented rice and black lentils. The ingredients are blended into a batter and then steamed. Idli is soft and fluffy but packed with nutrients.

Iodized salt is an ingredient that is used in many dishes around the world. Basic table salt has the element iodine added to it in order to help people get the proper amount of iodine in their diet. Iodine is necessary to help control the body’s metabolism and thyroid health.

Inca berries are a small fruit with an orange and yellow exterior. The berries are commonly grown in Australia and South America. The berries are sweet but also a little sour and have been referred to as a “healthy skittle”. The berries have numerous health benefits including being high in fiber and vitamin C.

Ice definitely does start with I and is used as an ingredient in many dishes. You can use ice to cool a drink or to help it quickly cool a soup. You can also add it to your ice cream soda to help thicken the drink. Ice is useful and used across the world.

Idaho potatoes are actually just russet potatoes that were grown in Idaho. Idaho potatoes have been said to make the best french fries and mashed potatoes thanks to the high starch content of the potato. Idaho has a perfect climate to grow potatoes which is why the region has become so popular for its potato variety.

Indian squash is also known as Tinda. It is a long green vegetable that is grown on a vining bush. The squash is popular in Pakistani and also Indian cooking.

Instant pudding is a fantastic and easy dessert that you can make in just a few minutes. Powdered pudding mix is blended with milk to create a thick, flavorful treat. The pudding mix typically contains sugar, flavorings, and thickeners that only need a cold liquid to become a dessert.

Ice pops are a favorite of kids around the world. Sweetened juices are frozen with a stick and then enjoyed cold. There are thousands of types of ice pops in grocery stores and you can easily make your own. Ice pops need to simply be frozen in a mold which varies from ice cream that needs to be churned while it freezes.

Cold coffee is served chilled with ice to make for a refreshing, caffeinated beverage. Iced coffee is typically brewed hot and made stronger than hot coffee. This powerful beverage will be diluted as the ice melts.

Both parts of this dessert start with I so it surely made our list of I foods. Italian ice is a frozen dessert that is similar in texture to a sorbet. Italian ice is usually made with natural or artificial fruity flavorings. The cold treat doesn’t contain dairy so it is perfect for those who are lactose intolerant.

Italian wedding soup is made with broth, vegetables, and meatballs. This dish is popular in Italian restaurants in the United States. The term “wedding soup” originates from the Italian phrase “minestra maritata” which means married soup. It is in reference to the marriage of meat and greens that make up the flavors of the soup.

There are many different kinds of icing and also numerous uses for this I ingredient. The term icing and frosting are often used interchangeably. Both terms refer to a sweet topping that can be used on cakes, cupcakes, or cookies.

Ilama is a tropical fruit that grows in Central America. Ilama has a pinkish hue and is part of the apple family. The fruits of the Ilama tree are sweet but also very tart. Ilama tastes similar to a mango and also has hints of strawberry. The flesh of the fruit is bumpy and needs to be peeled off before eating.

Iraqi Kubbeh is a red, hearty stew that is made from beets. The bright red color is part of this soup’s appeal! Onions, cinnamon, paprika, and cumin also add to the taste of the stew.

Many vodka brands are made in Iceland. Reyka is an Icelandic vodka that was considered to be the world’s first “green” vodka. It is made using glacial water and distilled using sustainable energy.

The Idaho Spud chocolate bar is a cocoa-flavored marshmallow that is wrapped in a thin dark chocolate coating. The bar is sprinkled with shredded coconut. Idaho spuds were originally considered “healthy” since the marshmallows were made without using agar-agar.

Indian almonds grow on large tropical trees in Asia, Africa, and Australia. They are also commonly called tropical almonds, beach almonds, or Malabar almonds. This specific type of almond tree is resistant to drought and also salt which is why it can thrive near the ocean coast.

An Icee is a frozen carbonated beverage that is made in various artificial fruity flavors or soda flavors. The popular drink is often sold in quick supermarkets or gas stations. Icee’s were originally created in 1958 and are also sold under the name Slush Puppie and Frazil.

Ice Breakers Mints are a breath mint candy. The brand claims to have the only mints made with flavor crystals which give your breath a refreshing minty lift. The mints are sold in small, convenient round holders that fit right in your pocket!

All you need to start making this drink is ice cream, milk, and carbonated water. Chocolate syrup, strawberry syrup, or other flavorings are often added to make the soda even tastier. Ice cream soda needs to be consumed fairly quickly before the ice cream melts and the soda loses its effervescence.

We have blog posts about a lot of different letter foods!  So, check out all our interesting alphabet lists and give a few recipes a try. In the meantime, enjoy this list and we will see you soon!

25 Foods that Start with B

50 Foods that Start with T

What to Serve with Broccoli Cheese Soup: 20 Sides You’ll Love
« No Bake Energy Balls
25 Foods That Start With J »