We are super intrigued by blue foods. Are you interested in blue foods, too? We bet that you are!

There are a surprising number of blue foods in the world, and we think you should try them all. 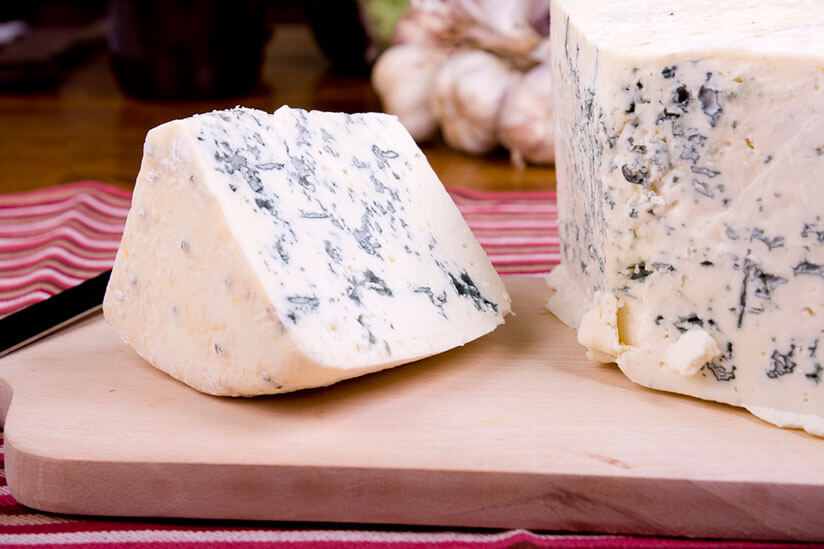 We found every edible blue food under the sun, from classic blueberries to the blue pea flower. How many do you already know, and how many are new to you? Take a look and see!

Blue corn is one of the best naturally blue foods. The Hopi people of Mexico developed blue corn, which has 20 percent more protein than white corn. 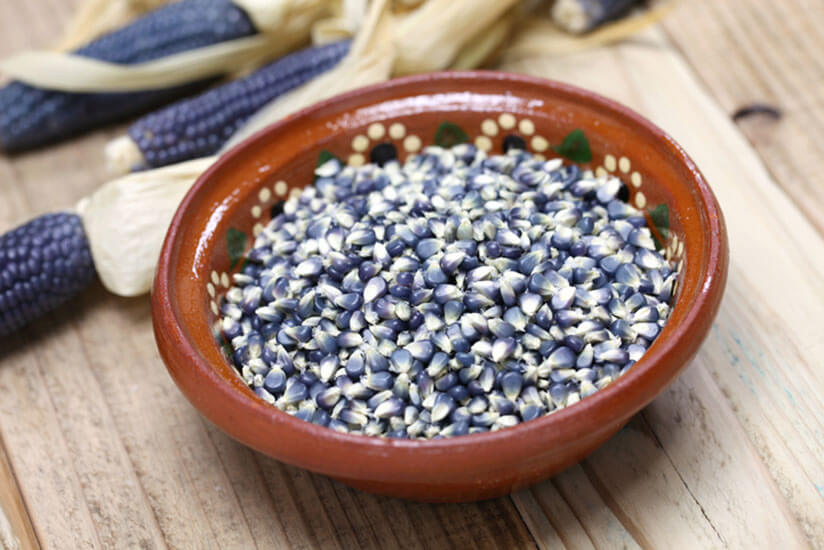 Blue tea flowers are used to dye white rice blue and add color to other foods as well.

Blue marble tree fruit is an iridescent blue when ripe. The seeds are often used to make leis or garland necklaces due to their beautiful color.

The Adirondack blue potato has blue flesh. The potatoes can be cooked like any other variety of potatoes.

Blue potatoes are high in antioxidants and also fiber. They turn slightly grey as they cook but hold the blue color for the most part.

Blue cheese is the next blue food on our list. It is a soft cheese with blueish-green veins running through the cheese.

The blue veins in blue cheese are created by bacteria, giving the cheese its potent flavor.

Bees in Alsace, France actually produce blue honey. Blue honey is quite rare so it may be tough to find. The color of the honey has been traced back to a local M&M factory. The bees must be enjoying some M&M’s while also making honey!

The indigo milk cap is an edible mushroom native to North America and Eastern Asia. Blue mushrooms are rare and quite stunning.

Not all blue-capped mushrooms are edible, so it is important to know which are safe to eat and which are dangerous.

The American blue lobster is native to the Atlantic ocean. The color is due to a genetic mutation, and the blue lobsters are considered a rare delicacy. 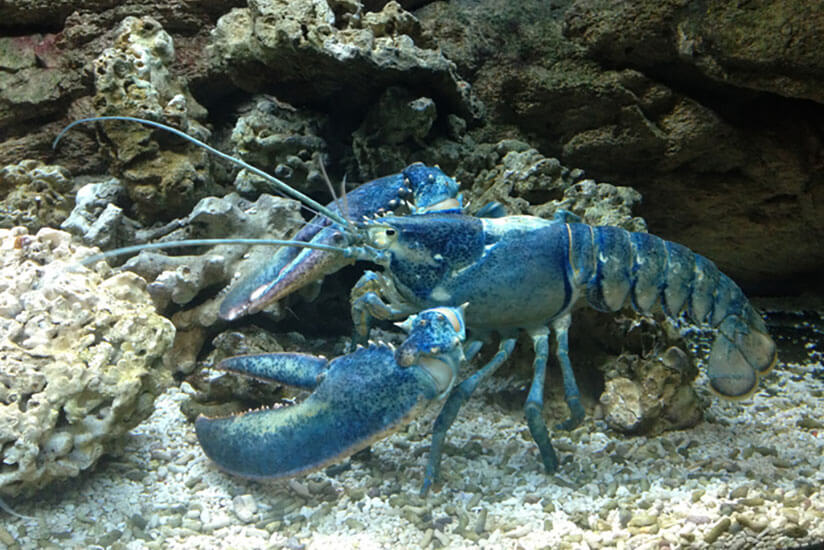 Concord grapes have a light blue color that turns darker when the bloom is washed off of the grapes. They are most often used to make grape jelly or grape pies and turn a purple color when cooked.

Concord grapes can be eaten fresh, but they have many seeds. Grapes can also help prevent heart disease, lower high blood pressure, and improve heart health.

Blue tortillas are made with blue maize. The blue corn is ground into a fine flour and then mixed with water and sometimes a little baking powder to help the tortillas rise. 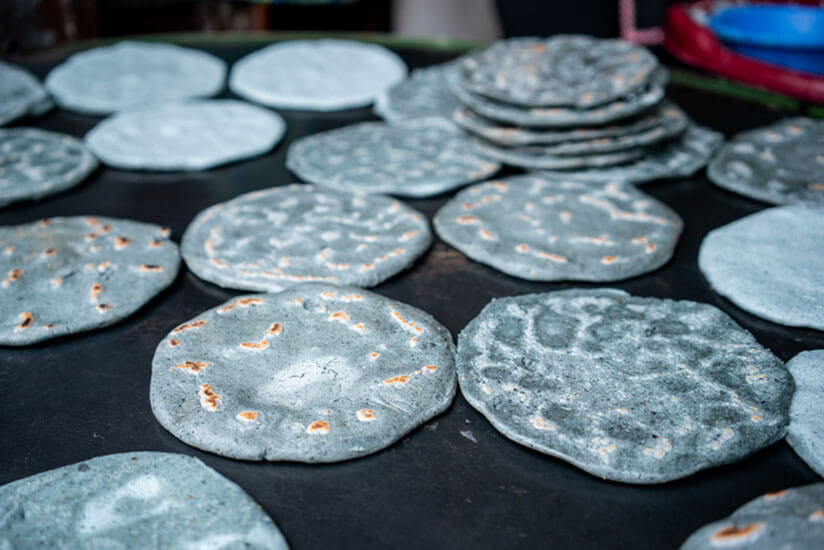 The blue color is from the anthocyanins, which function as an antioxidant, boosting the immune system. These tortillas are a staple in American southwest cuisine.

The Indigo blue beauty tomatoes are a type of beefsteak tomatoes. They are thick, meaty, and have a subtle blue thanks to blue anthocyanins, a variety of plant pigment that has many health benefits.

Blue tomatoes are a great source of vitamins C and E. There are so many fruits and vegetables that are blue!

Blueberries may be the most popular blue fruit. The berries are rich in antioxidants and have been shown to have many brain health benefits. 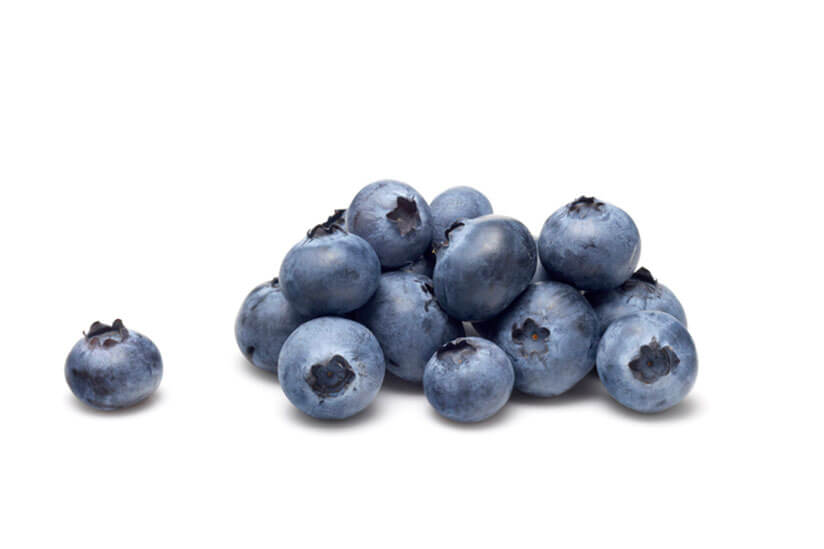 Blueberries are soft, sweet, and completely blue when ripe. They are one of our favorite naturally blue foods!

Borage seed oil comes from the blue borage plant. The oil is mainly used for skin disorders like eczema. It can help heal red, itchy skin.

Borage oil is a pale blue color. It is also edible; however, it should be diluted before consumption.

Blue corn chips are made using blue corn originally developed by the Hopi people. The blue hue of the chips is completely natural.

Blue chips taste the same as white corn chips. The deep blue is almost purple and looks great on a plate or next to a bowl of fresh salsa.

Starflowers are a pretty blue-purple flower that is native to Europe. The herb is used for its edible leaves, and many people grow it in their gardens. 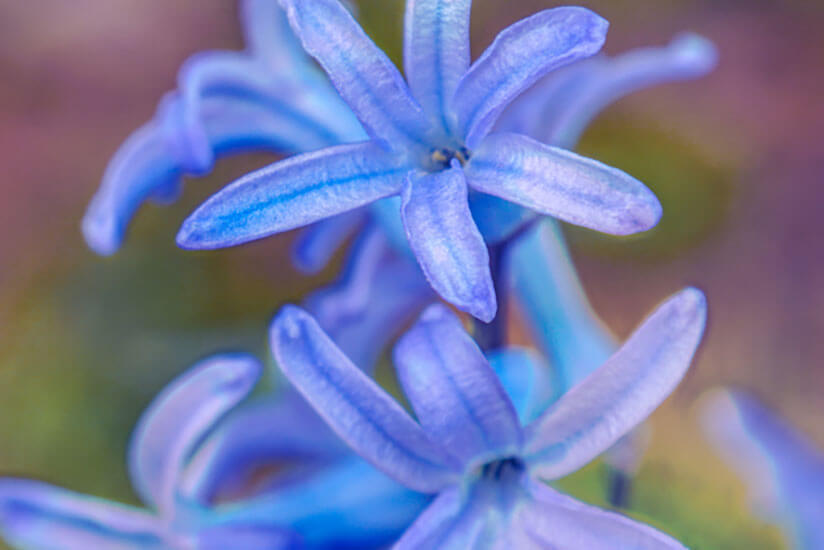 Boiling red cabbage with baking soda will turn the vegetable blue. The reaction of the acid and the cabbage is quite fascinating and a quick way to turn red cabbage into a very fun and exciting food.

Pacifico Mexican Blue Shrimp is the most common type of blue shrimp. The flesh has a subtle blue that fades as the shrimp cooks. 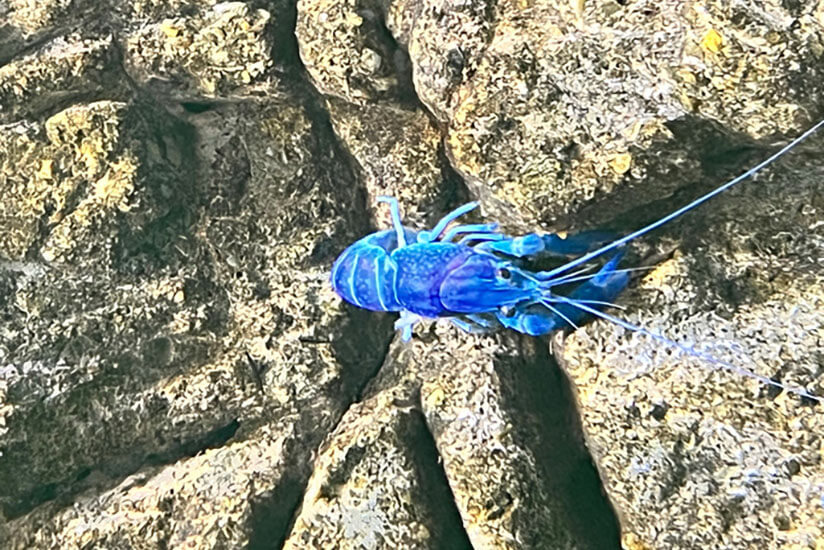 Blue shrimp is high in protein but low in calories.

Blue Lingcod’s flesh is a blue color due to biliverdin, a bile pigment that disappears when the fish is cooked. Blue lingcod is a bottom-dwelling fish found in the Pacific Ocean. It is a good source of protein and omega-three fatty acids.

Blue curacao is made from the bitter orange fruit called lahara. The liquor is dyed blue and used to make bright turquoise blue cocktails. 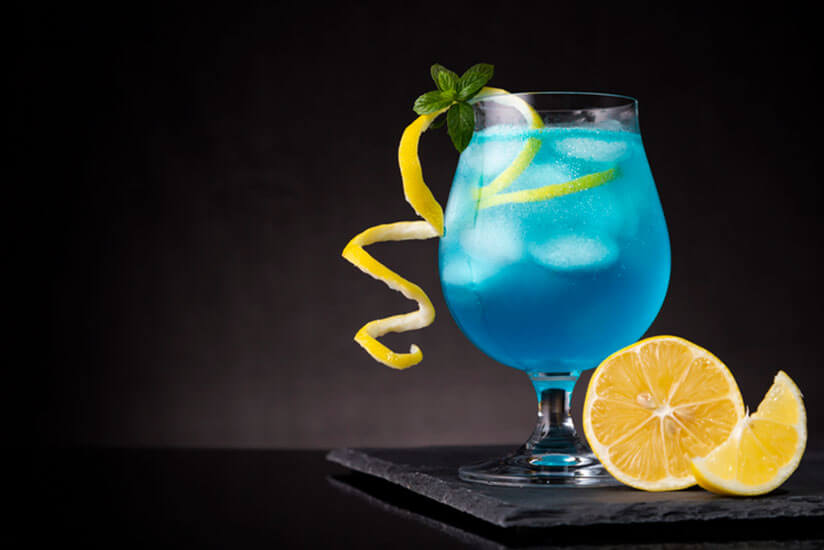 Blue spirulina is one of the healthiest foods on the planet. It is packed with phycocyanin which gives it the color, and has tons of antioxidants and anti-inflammatory properties. 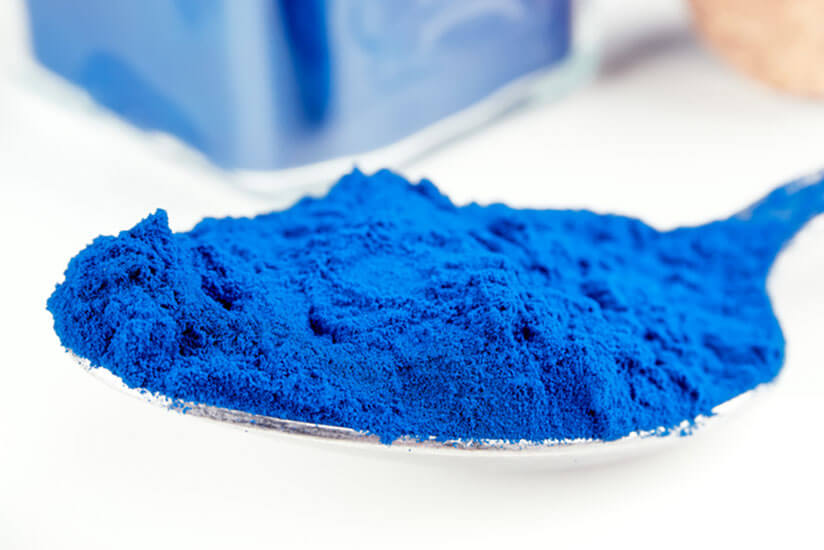 Blue spirulina powder also comes in green and can be added to drinks and foods to give them a nutritional boost.

There are many types of fish that are categorized as bluefish. Tuna, salmon, carp, and herring are just a few examples.

Bluefish have a higher fat content than white fish.

Japanese milk bread is intensely blue, thanks to the addition of loose butterfly pea flowers. The flowers do not add much flavor but make the bread have a very unique color.

Utrecht blue wheat is native to the Netherlands. The blue wheatberries are edible but typically used for ornamental purposes since they are hard to thresh and grind for consumption.

The Atlantic blue crab is a type of crab found on the eastern shore of the United States. Blue crabs are prized for their tender meat and soft shells. 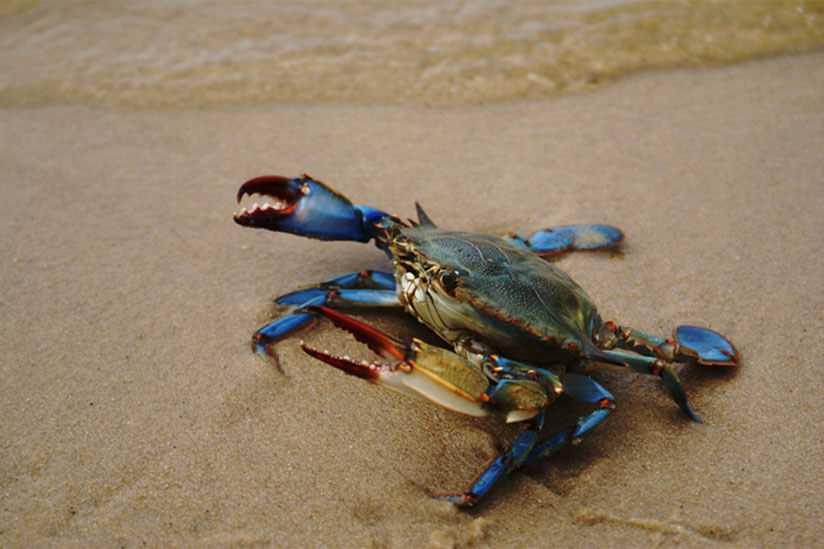 When caught young, the shell of the blue crab is also edible.

Pansies are wild, edible flowers with a mild, fresh flavor. They are a great addition to a salad or as a garnish. 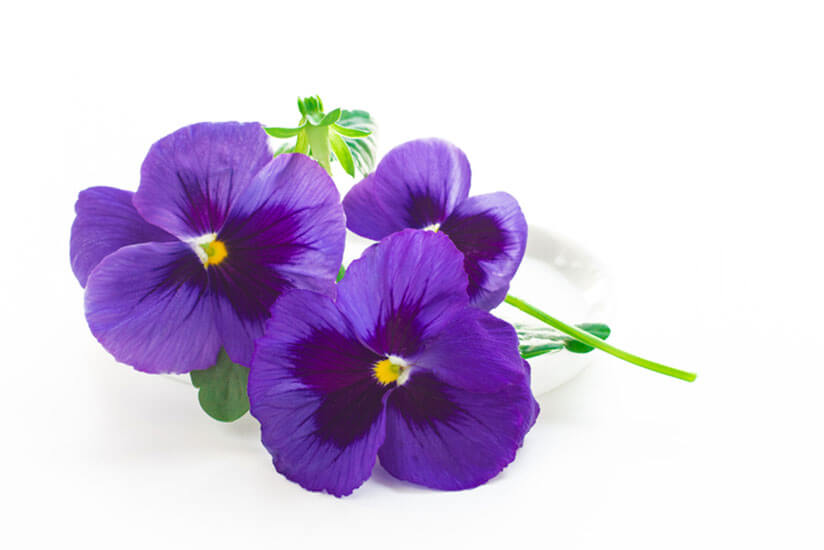 Pansies come in all different colors, but we especially love the blue! Any totally natural blue food is something we want to try!

The Chesapeake blue crab is a very rare type of crab that is only blue due to a genetic mutation. The meat of the crab is pure white with a sweet but salty flavor.

Tuscan blue rosemary tastes like regular rosemary, but it has a beautiful light blue color. It is a very strong-flavored herb that is best when chopped fresh and added to your favorite Italian foods. 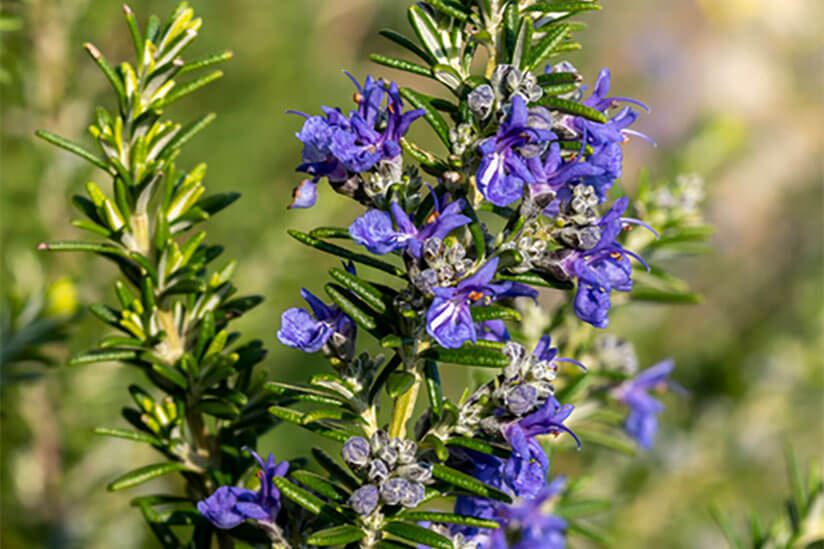 Blue sausage fruit is a transparent blue. It is about the size of a pickle and has a mild, sweet taste, much like a melon.

The blue skin of the sausage fruit is inedible. The seeds are also toxic, but the purple, blue fruit flesh is safe to eat.

Bachelor buttons are a great edible blue flower. The petals are a slight blue and can be used as a garnish, herbal medicine, or to make tea.

Bachelor Buttons are also called cornflowers. No matter the name, they are great blue food! 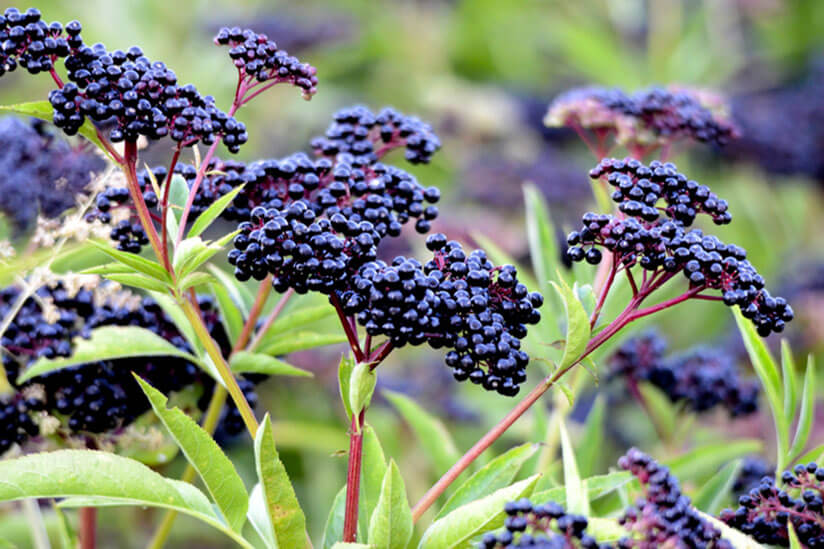 The blue and purple fruit is grown on large bushes in mild climates.

Damson plums are frequently used to make jelly and jam which are packed with fiber and vitamins A, C, and E. They also make great prunes.

Several different breeds of chickens lay blue eggs. The blue pigment on the shell is due to high levels of biliverdin, a byproduct of bile digestion. 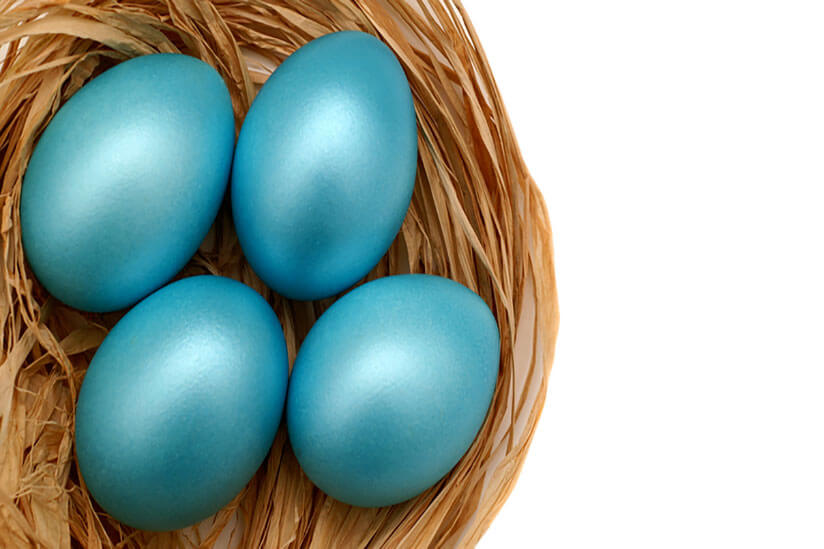 Blue caviar is also called the sapphire of the ocean. It is a while type of roe harvested from scampi off the coast of Australia.

Blue caviar is high in omega-three fatty acids and also in protein. This rare delicacy may be many people’s favorite blue food.

Blue oyster mushrooms have a firm texture and a sweet taste. The tops of the mushrooms are a pale blueish grey. 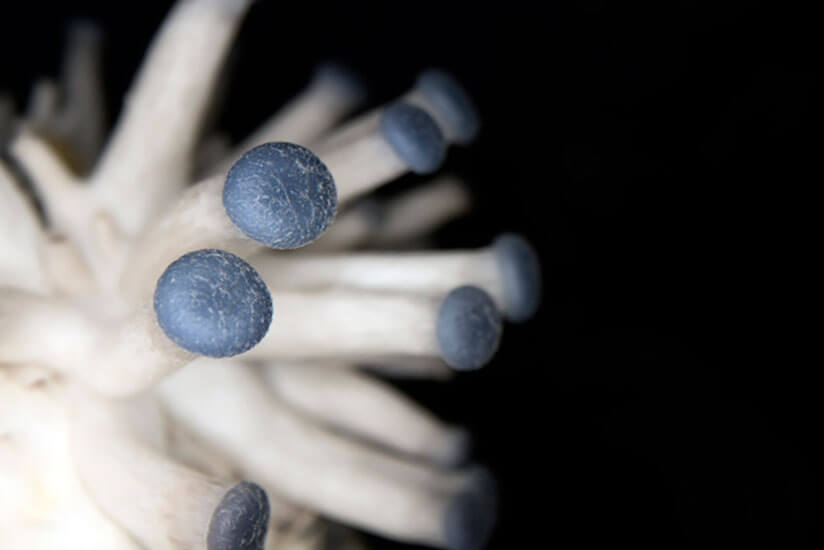 Blue oyster mushrooms have lots of vitamin B, vitamin C, and vitamin D.

Blue sea salt is harvested in small salt ponds in Iran. The color comes from a mineral called sylvinite which is found in the ponds.

There are over 20 different varieties of blue pumpkins. The peel of each pumpkin is blue, while the flesh of each type is still orange. 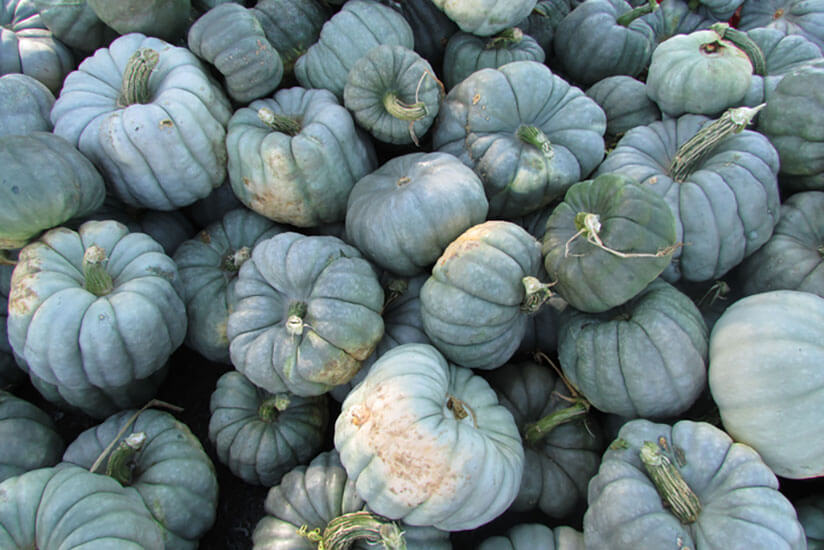 Look for blue pumpkins in rural markets to make your Halloween and fall seasons colorful.

Blue M&M’s have to be on our list of blue foods! Blue M&M’s were added to the candy bag in 1995 after a national vote for the new color. 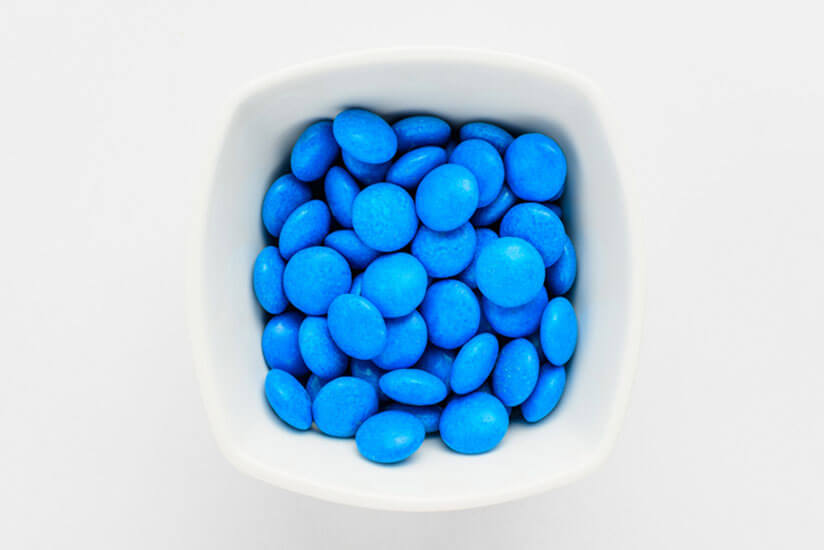 Kneading squid ink into pasta will turn the dough a light blueish grey. It also adds a unique flavor to the pasta, giving it a delicious taste and color.

Blend some blueberries into yogurt, and it will turn blue! Blueberry yogurt is a fruity classic that many berry lovers crave. 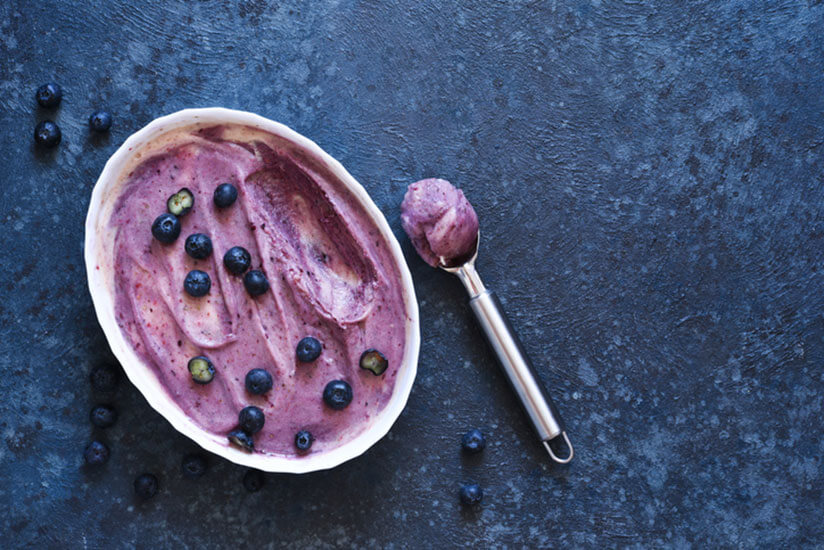 Sometimes blueberry yogurt will look a little purple since the purple berries are in between colors.

The filius blue pepper may be the prettiest pepper we have ever seen. It is a fairly mild flavored pepper and only grows to be one inch long. 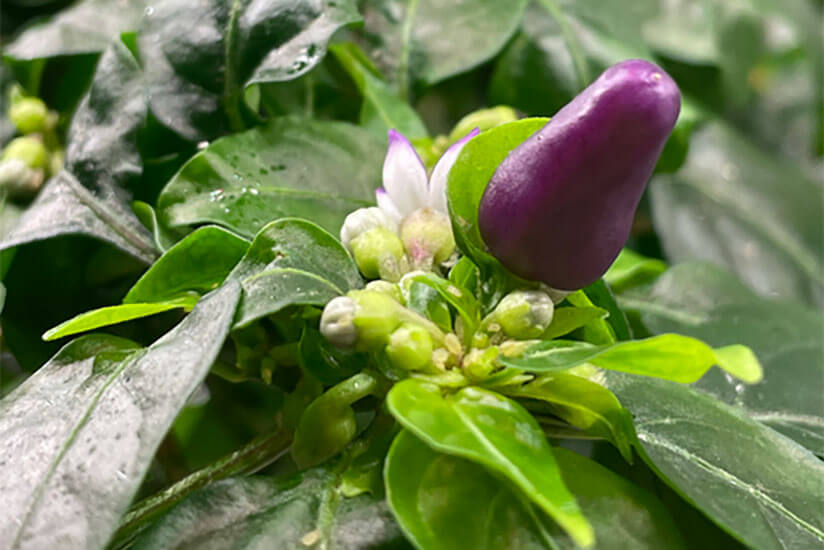 The blue hue makes it quite interesting, and the pepper stays blue when cooked.

Try a blue pea flower or give a heart-health-boosting blueberry a try. You can’t go wrong with blue foods!

If you find blue foods, we missed, be sure to let us know! Enjoy.