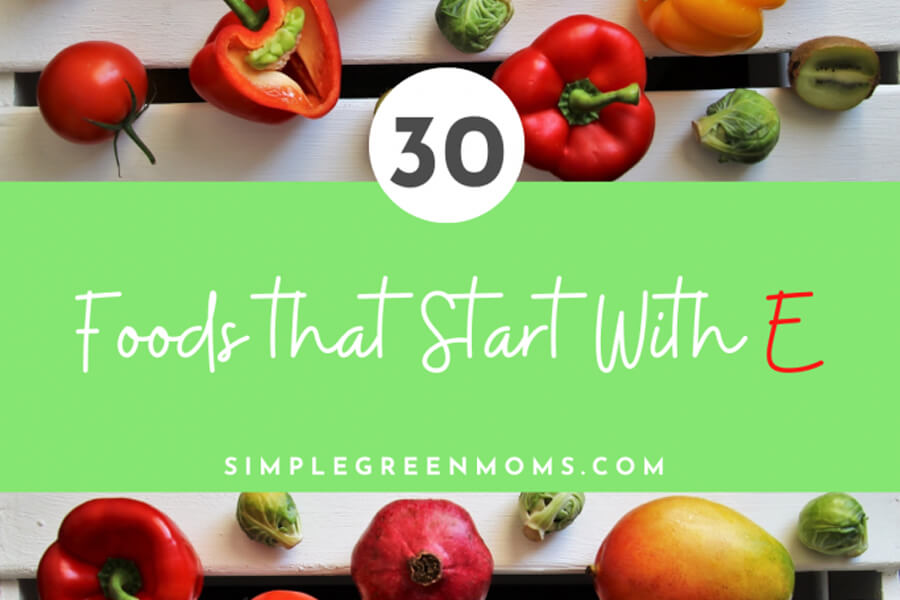 Egg salad is creamy, flavorful, and quite easy to make. Most recipes mix mayonnaise, hard-boiled eggs, salt, pepper, and chives. Serve the salad on bread or enjoy it on its own. This salad is a staple at summer picnics and outdoor BBQs. Slice up some watermelon and pour a cold glass of lemonade to serve alongside this tasty e food.

Elbow macaroni gets its name from the curved shape of the pasta which resembles an elbow. It is often used to make macaroni and cheese or served in a soup. Pour the dried pasta into a big pot of boiling water to cook it to perfection. Macaroni is a very easy meal to prepare!

Edam cheese originated in the Netherlands and is named after the town where it was created. Edam cheese has a soft, yellow interior and a red wax exterior. The cheese does not spoil but only gets more firm as it ages. The taste is very mild and pairs well with strong fruity flavors. Keep this in mind when you slice up your Edam to serve on a platter of cheeses.

Edamame is actually an immature soybean. The bright green beans are typically steamed and seasoned with salt then served hot. Use your teeth to pop the bean out of the shell and enjoy the tender, healthy vegetable. Dip them in some soy sauce or wasabi for a traditional, Japanese version of the veggie.

English muffins are flat, circular, yeast-risen muffins that are known for their nooks and crannies which are perfect for absorbing butter. This type of muffin is usually a breakfast food and can be served with a savory topping like this veggie cream cheese. The muffin itself is a semi-sweet bread that often has raisins, cinnamon, or even cranberries mixed into the dough.

English walnuts have a thin shell with a rich seed in the center. They are heavily cultivated across Europe. An English walnut must be planted and grown in an orchard as the trees do not naturally grow in the wild. Some shelled walnuts make for a great afternoon snack as they are full of healthy fats that will fill you up.

Emmenthaler is a medium-hard cheese that originated in Switzerland. It has many holes that make the cheese look very similar to a common swiss cheese. The cheese is also known as Emmental and has a mild, buttery taste.

English sole is a flatfish that lives on the bottom of the ocean near the shoreline. The fish has a very mild taste and a flakey texture. It is delicious when breaded and fried or steamed in a white wine sauce.

Elephant ears are actually a buttery, sweet pastry. To make elephant ears, puff pastry is brushed with butter then sprinkled with cinnamon and sugar. The dough is rolled into two spirals which then look like large ears. The ears can be made smaller and served as bite-sized cookies.

Egg drop soup is a very common Chinese soup and our next food that begins with E.  It is made by whisking raw eggs into a hot, chicken broth. The eggs cook in the broth creating a cloudy, flavorful dish.

Escargot is a classic French dish made with land snails. The escargot snails are baked with butter, wine, and seasonings. The land snails are typically served as an appetizer and are considered to be a delicacy. Escargot is cooked and presented in the shell but a small dinner fork pulls the tender meat right out.

Espresso is a strong coffee drink and the next food on our letter E list of foods. Ground coffee beans are compacted and then hot water is pressed through the grounds. The result is a highly caffeinated drink that can be sipped as a shot or mixed into a latte, cappuccino, or americano. Espresso is often served after meals as a late-night pick-me-up.

Eggs are a commonly eaten food around the world. The most common type of eggs come from chickens but duck eggs, turkey eggs, and goose eggs are also all eaten often. An egg is naturally high in protein and considered a very healthy food.

Earth nut is most often called a peanut. Peanut plants flower above the ground but the underground peanut vine is where you will find the edible nuts. This is why they are called earth nuts as they grow in the earth! The pod of the plant is where the nut grows. Crack open the dried pod and pull out all of the peanuts inside. Most shells contain two nuts.

Endive is the next of our E foods. Endive is a leafy green that is quite bitter when eaten raw. Saute endive with a little garlic and extra virgin olive oil and it turns into a tender and delicious vegetable. Once steamed, endive can also be cooled and served in a salad along with some fresh tomatoes, chickpeas, and soft cheese.

Egg noodles are an easy-to-make dinner food and, of course, a letter E food! Egg noodles are made by rolling out an unleavened dough, cutting it into strips, and then boiling the long noodles. You can find egg noodles alongside the dried pasta in most grocery stores. The noodles are perfect in soups or used in your favorite pasta recipes. Toss the cooked noodles in some butter and add a little parmesan for a simple dish.

Egg fruit does start with the letter E but it is most commonly called canistel. Eggfruit has a similar taste to egg yolk and also has the same bright orange coloring. Eggfruit can be baked or eaten raw and the crumbly texture is great when sprinkled over a salad. It is also perfect to blend into a smoothie for some extra nutritional value. You can use this lesser-known e food in so many ways!

Ecrevisse are tiny, lobster-like shellfish that are found in fresh water. They are typically called crawfish or crayfish. To prepare these little E foods, they need to be steamed or boiled. The meat is then removed from the shell and enjoyed while hot. Some cajun seasoning or just a little salt and pepper will bring out the flavor even more.

Enchiladas are up next on our list of foods that start with E. Enchiladas are a classic Mexican dish that contains flour or corn tortillas stuffed with seasoned meat. A red or green tomato sauce is poured over the tortillas, sprinkled with cheese, and baked. Choose between chicken, beef, or veggie enchiladas. They are all delicious!

Eggplant is a beautiful purple vegetable that is quite easy to grow in your home garden. The outside of the veggie may be tough but the inside is soft and spongy. Eggplant is often used in Italian cuisine and served with some tomato sauce, shredded cheese, and fresh basil. Fry up a few breaded eggplant slices for a tasty appetizer.

An egg roll is perfect for our foods that start with E list. This classic Chinese food has a crunchy shell that is stuffed with thinly sliced veggies and meats. Pork eggrolls are most common but you can easily find vegetarian egg rolls in almost every Chinese restaurant. While this E food is usually deep-fried, you can opt for a healthier, baked version as well.

Eel is actually a very delicious food from our letter E list. The long, skinny fish is amazing when prepared correctly. Try serving your eel cooked with a side of wasabi and soy sauce. It also makes for use inside the sushi. Be sure to find a few good eel recipes as the fish can be a little slimy when not cooked well.

Enset is a member of the banana family and often called a false banana. The enset plant is very drought tolerant and grows naturally in Ethiopia and other equatorial African countries. Enset is mostly used as a starch with the stems of the plant being eaten rather than the fruit.

Emu apples are very small, cranberry-like fruit and make for perfect foods that start with E. They are a little more exotic than a regular type of apple and found mostly in Australia. They have a bit of a spicy kick and are better when used in savory foods rather than desserts.

Eggnog is a wonderful, Christmastime drink that is both rich and flavorful. Eggnog is made by cooking eggs and sugar together then whisking in heavy cream. Nutmeg, cinnamon, and allspice are added to the drink to give it that signature flavor. Add a little rum to the eggnog for an adult version of the drink.

Eclairs are next on our foods that start with E list. This decadent, rich pastry is a French classic. An egg-risen dough called pate a choux is baked and then stuffed with pastry cream. The pastry is dipped in melted chocolate ganache and served chilled. One bite of an eclair and you will be in love!

Eggo waffles are one of the easiest and most convenient foods that start with E. You can find them right in the freezer section of your grocery store! To prepare an eggo waffle, simply pop it in the microwave or toaster oven to heat it up. Serve your waffle with maple syrup, fresh fruit, or whipped cream. No recipes are needed to make this quick breakfast treat.

Empanadas are a flakey dough stuffed with a variety of fillings and deep-fried to a golden crisp. Chicken, pork, cheese, or vegetables are the most common fillings. Empanadas can be made using a yeast dough or a simple flour, water, baking soda, and salt dough. Both versions will taste great and have an authentic Mexican flair.

Elderberries are small, dark-colored berries that are known for their health benefits. These small, tangy fruits have been used throughout history as a medicine, helping to cure common colds and boost one’s immune system. The berries have recently gained in popularity and are sold in many stores right alongside vitamin C.

Evaporated milk has many uses in the culinary world especially when it comes to baking. The sweet, concentrated milk has a beautiful caramel flavor and color. It can be mixed into bread, pastries, and sweet cream fillings. Many food items feature evaporated milk and it’s always good to have a can on hand. The canned milk has a long shelflife so it will stay fresh in your pantry for quite a while.

Isn’t it amazing how many foods that start with E there are? It may be hard to choose which types of e foods to try first. We recommend trying all of the foods that start with E and then letting us know which you like the best. Will you be a fan of elderberries or will escargot be more up your alley? Perhaps some Edam and emmenthaler cheese served with a table grape and crackers will be more your style. You can’t go wrong with foods that start with E! We hope you enjoy them all.

60 Easy Appetizers for a Crowd Best Food Dehydrator in 2023: Top 7 Picks
« 40 Delectable Foods That Start with D
What to Serve with Meatloaf: 15 Tasty Side Dishes »